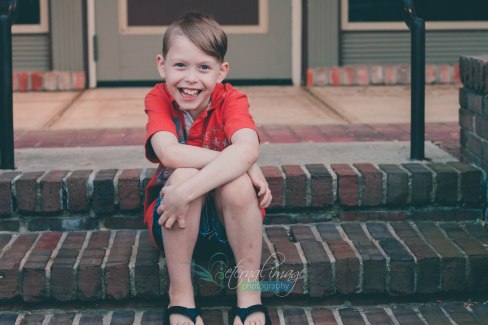 Twice-exceptional, better known as 2e. It’s a term used for a child who is on the gifted spectrum, but also has another impairment. Most commonly that impairment is something like an anxiety disorder or dyslexia. Occasionally it’s something like autism.

And today our youngest son received his 2e badge.

Backing up, this whole thing started when he was a toddler and his sensory issues were blatantly obvious, especially when it came to seeker and oral sensory — always moving, always putting things in his mouth. We disregarded meltdowns as typical toddler behavior. It wasn’t until he started school in kindergarten that we started to wonder… and he was diagnosed with sensory processing disorder in first grade at seven years old.

While his behavior at school was rarely a concern, his meltdowns at home increased. He had (has) rage fits. He’s self deprecating anytime he doesn’t meet perfect standards and has… and it breaks me to type this… resorted to self harm at the worst of it.

After a year in occupational therapy, it was recommended that we get him a counselor as well because the OT was spending too much time working on his emotional management and not enough on his sensory issues. During the intake evaluation for counseling, for the first time in our son’s eight years, we were asked “has he ever been evaluated for autism?”

That question stopped us cold and led to more questions: Could this be what all his struggles are about? Why had no one said that before? Why had we not seen this ourselves?

He takes hip hop classes too!

Fast forward through the extensive evaluation process over the last few months (which consists of a preliminary eval with a psychologist, speech therapist and OT all present, followed by individual evals with each if deemed necessary), we had our feedback appointment with the psychologist today…

Listen. I get it. Some of you are reading this and are wondering why I’m sharing such personal information. Why I’m telling the world my son’s specific diagnosis. Maybe you see this as a pity party, cry for attention, what-have-you.

Here’s the thing though. For eight years we’ve been “treating” individual things, not realizing there is a much bigger picture holding them all together in one web of complicated cognitive strengths and deficits for him. And we never saw it. For eight years, no one saw it. Because giftedness has its own struggles. Autism too. Together, the two are virtually indistinguishable… until they’re not.

Just five years ago, signs of autism looked so differently. Even with such a broad spectrum now, parents still don’t know what to look for, especially parents of gifted children. As we mulled over what to do, this comparison list from Davidson Institute opened our eyes to several red flags that led us to pursue the evaluation.

So I share in hopes that someone who reads this — whose spider-sense keeps fluttering that something more is going on with their child — will choose to at least do the evaluation and pursue access to additional resources.

Mine kept fluttering, sometimes pounding in my ears. Now I have to contend with the guilt of ignoring it for so long. But we’re here. He’s going to get the help he needs to not only function, but thrive. That’s what a momma longs for — what she fights for. And I will fight with all I have.

One response to “Broad Spectrum”