Last year, God gave Josh and me a word — something to pursue in all things throughout 2017. That word — which we both came to exclusively, without input from one another — was “abundance.” And, as you may have noticed, an entire philosophy of life worth sharing with others was birthed out of our word for 2017. 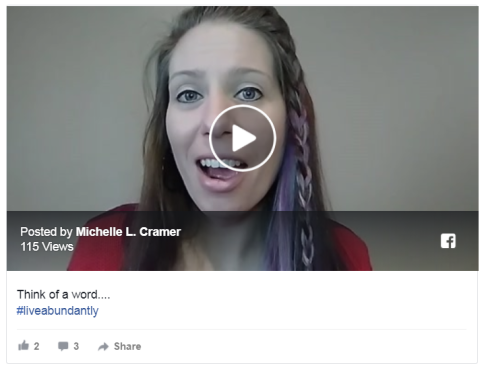 So, this year, we spent a couple of weeks, separately pondering what our word for 2018 would be as a family. I thought I had one in mind, but this year, Josh wasn’t tuned to the same frequency. In fact, when he finally told me his, I was a little disappointed that it didn’t match what I thought I’d been hearing. But as we chatted more, we found the our separate words to actually be rather connected. And within moments of discussing how we would apply those two works, a third came up. So, we have three words for 2018:

Let me explain how this plays out. Both of us have a tendency to worry. While I look for the silver lining, I still get anxiety about the unknown, the waiting, the limbo. Josh is more pessimistic than I am… well, a lot more. He often brings up all the ways a situation could be difficult, a let down, or really hard. He says he’s not pessimistic, but “logical.” Ha!

Either way, we both need to learn how to better release things to God’s hands, rest in the fact that we know he’ll take care of us as he always has, and wait for his renewal in the situation.

I recently balanced the checkbook. It’s one of my least favorite adulting responsibilities (I’d honestly rather clean toilets), which is why I was three months behind. But I had to figure out where we were because the holidays limit how much we have coming in (gifts, lack of overtime hours available for Josh, me having to take off work while the kids were on break, etc.), and we keep our budget tight for purposes of paying off debt. For the first time in years, we had more in our account than I thought we did, but I still had to pull from savings for a couple of things.

That is frustrating, but once we changed our priorities with our spending a few months ago, God has changed our cash flow. Our income hasn’t changed, but our use of it has. So, while we were a little tighter than usual this month, we are releasing it to Good, resting in his provision, and anticipating renewal in our finances this year. Another example: Our youngest son was diagnosed with Sensory Processing Disorder (SPD) back in early November, but we found out that our co-pay for occupational therapy will be nearly $300 per one-hour session, which is certainly not feasible to outright pay and we wanted to avoid adding numbers like that to our debt. I’ve spent the last few months knocking on every door I can think of to get him help. But I’ve had to release it to the Lord and rest in the fact that he’ll open the right door.

Well, last week we received a letter from Children’s Miracle Network awarding us with a sponsorship to cover his OT for nearly a year!! God’s renewal for Lincoln is on the horizon!

These are examples, but the year ahead will be full of teachable moments from the Lord. And we won’t always be up to the challenge. So, we came up with a quirky little reminder for one another when we’re not abiding by this philosophy for 2018 of release, rest and renewal. When one of us misses the mark, the other will softly growl “rrrrrrr.” A silly little noise to lighten the mood and remind each other of our dependence upon a faithful God. Isn’t that cute?

So, what’s your word for 2018? How are you using it to #LiveAbundantly this year?